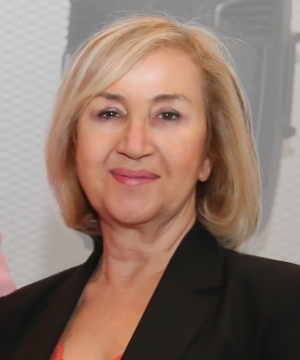 Gonca attended Gazi University where she studied in the departments of Science, Chemistry and Teaching. She also attended Anadolu University’s Open Education Faculty where she studied Business Administration. Since the last years of her career were management intensive, she supported her undergraduate education with national and international certificate trainings that would contribute to all areas of management and her personal development. During her 27 years of professional life, Gonca has worked as a teacher and education manager in schools and as a manager and consultant in various service sectors. While Gonca worked as a general manager, education manager, teacher, and as a consultant in various service sectors, in addition to working on a private college projects with a few of her friends and colleagues, she suddenly had to leave her positions, push everything aside, resign, and return to her home. Both of her daughters began to experience serious health problems that were getting worse over time. This required her to take care of her daughters on a full time basis. She knew that healing her daughters and helping them to overcome their health problems was not going to happen through classical medicine methods. The only solution that psychiatric medicine had to offer them was a handful of drugs that came along with terrible side effects including damage to vital organs such as the kidneys, liver, and pancreas. This approach did not offer the results she was looking for, so she turned to natural/traditional treatments and energy medicine to support vital organ function, but she was still looking for a way to resolve the psychiatric issues both of her daughters were experiencing. Continuing her investigation and research, Gonca learned that the cause of neuropsychiatric diseases was due to intestinal flora abnormality and leaky gut syndrome. She learned of various tests to analyze gut flora and after testing each of her daughters, and various lab reports confirmed that they each had abnormal gut flora composition and leaky gut. She finally had some hope after one full year of searching for answers! Soon though, it became apparent that the field of microbiology was very advanced and she felt like she was back at square one. Feeling hopeless that healing was not in sight, Gonca frantically began searching for a remedy and that is when she came across a little yellow book titled, “Gut and Psychology Syndrome". It was sold on Amazon.com and the reviews about the book were incredible. Among the most severe conditions such as autism, epilepsy, schizophrenia, MS, celiac, ulcerative colitis, there were comments from those who recovered from diseases such as attention deficit, hyperactivity, allergies, eczema She bought the book for $28 and even paid for expedited shipping (double the cost of the book itself), but it would turn out to be worth every penny! The book explained everything about how to apply the GAPS Nutritional Protocol to address conditions that fell within the scope of psychology and physiology syndrome by balancing the composition of the intestinal flora. She immediately translated the GAPS book into Turkish and applied the treatment in the exact way it was described in the book. Pelinsu, Gonca’ eldest daughter was able to get rid of all her medications and she has not been using any psychiatric medication since that time. Her other daughter, Feride Pınar, was also able to get rid of her most severe symptoms. Feride Pinar stated that "These drugs are of no use to me anyway." After the miraculous results Gonca and her daughters experienced, they contacted Dr. Campbell-McBride and explained to her that they wanted to translate the GAPS book into the Turkish language. In January 2014 the Turkish version of the GAPS book was finally published and Dr. Natasha come to Turkey as guest to the GAPS Conference in Istanbul in 18 October 2014. Later, this conference started its broadcasting life as a GAPS DVD with Turkish subtitles. In the same year (2014), Gonca started organizing GAPS Practitioner Certificate Training Programs, in which only doctors and dieticians participate, to advise the implementation of the GAPS Treatment Protocol. As of today a large growing GAPS community has been created with 25,000 GAPS Book readers, 433 GAPS Consultant physicians/dieticians and their recovering patients. With GAPS TV, which will bring the voice of this community to a wider audience, we hope to help millions of people experience miraculous changes in their health with the GAPS Health Association projects, treatment centers with accommodations, GAPS Nurseries, schools etc. I Gonca could not be more grateful for GAPS and she truly believes that Dr. Natasha is a candidate to receive the Nobel Prize one day in the future. World medicine is finally beginning to understand the role of the intestines and the subject of the Intestinal Microbiota is showing up everywhere these days. Modern medicine has just begun to articulate what GAPS has been saying for over 22 year, but there is much work to do to spread the word about balancing the microbiota and how to effectively overcome leaky gut syndrome. Gonca’s hope is that the GAPS Protocol will soon be included in all medical treatments.