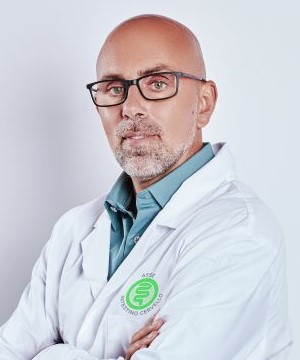 Shantih Coro is a nutritionist expert in sports nutrition, clinical nutrition, and anti-aging.

Shantih did not become a nutritionist by accident. He starts sports at a young age with Karate at 6 years old and reads his first nutrition book as a child, at the age of only 7 years old, a thick book of over 600 pages. He was a frail child with severe digestive problems since he was born suffering of debilitating colitis. As a teenager he continues to have digestive problems, due to which his appendix is removed and by 14 years old developed dyslexia and ADHD. He started to dedicate all his energies into sports and eventually martial arts that led him to live a healthy lifestyle that taught him perseverance and discipline.

At the age of 27 years old he was diagnosed with severe Crohn's disease and at his lowest point he weighed 80 lbs. and doing the stairs was like competing in the Olympics. However, he refuses to be sick for life and starts reading everything he can in the scientific literature of the time until he arrives at the GAPS Diet conceived by Dr. Natasha Campbell-McBride. He started also to engage in breathwork, meditation and observed that when he was outdoor, he was feeling much better, so he started to spend lots of time in nature and sunbath for many hours, at the same time he does a profound work on himself and start to read everything to change his attitude. Shantih does not simply go into remission, vice versa his intestine goes back to being THAT OF A HEALTHY PERSON, as confirmed by the incredulous eyes of his gastroenterologist.

During this time, he started to study biology, evolutionary biology, photobiology, human nutrition, and physiology and discovered the love for health and science. In 2005 he moved to Florida to study and graduated in Nutrition and Dietetics from the University of North Florida followed by a Master in Exercise Science and Sports Nutrition at the University of Tampa.

He therefore can interact with the best athletic trainers in the country such as Juan Carlos "JC" Santana, Mark Verstegen, Charles Poliquin, Mike Boyle, learning from the best sports nutrition researchers, such as Dr. Jose Antonio, RD, PhD, Dr Douglas Kaulman, RD, PhD and many others.

In the field of human nutrition Shantih has contacts with Dr. Natasha Campbell – McBride, Dr. Elizabeth Lipski, Dr. Kaayla Daniel and many others. They too help him to be what he is today. Shantih works as a nutritionist alongside ophthalmologist Dr. Jennine Cabanellas, MD, and then with Dr. Mitch Ghen, DO, PhD specialist in anti-aging medicine and pioneer of intravenous nutrition therapy. Most importantly, he worked for several years at one of the largest integrative urology clinics in the United States in Miami, Florida with urologist and surgeon Dr. Edward Gheiler, MD, FACS and oncologist and researcher Dr. Fernando Bianco, MD , on patients suffering from digestive, urological and autoimmune problems. At the same time, He worked with many Olympic, professional, and elite athletes of several sports, especially combat sports, and helped UFC Thiago Silva to prepare for his fights and the number 5 in the world of professional tennis of the time.

In 2022 he opened the first online coaching program in Italian for those that do not have optimal health, that include the GAPS Diet, lifestyle changes and light therapy. He is also an instructor for Dr. Natasha Campbell-McBride in Italy and will run the first course for dietitians and Doctors in 2023.

He has participated in the publishing of the 2 first research of the GAPS Diet and is currently work on the third together with the team of the GAPS Science Foundation. In Italy in 2020 published his first controversial book with a strong stance against the cholesterol hypothesis “Cholesterol and health: between truth and myth” and in 2022 he published his second book that regroup all his 30 years of experience “GAPS Lifestyle” a 360-degree approach for rebuilding health and anti-aging focused on lifestyle.

In recent years, reaching 40s, he discovered a passion for anti-aging and started to study extensively what can slow down the aging process and the behavior of healthy people. In 2022 together with biologist and bodybuilder Enrico Dell ‘Olio he launched Italian Anti-Aging the first online coaching program on anti-aging for men focused entirely on ancestral nutrition and lifestyle with the Italian touch to slow down the aging process and optimize hormones naturally.